The effects that electromagnetic fields have on our health are still being researched. However, a lot of the information available on the topic points out that these fields could be a reason for concern. We can, therefore, at least read more on the matter, try to be as informed as we can and take action if there’s the need for it. If you are a person who would like to take things a bit further and find out ways of preventing the exposure to electromagnetic fields, you could start off by getting an electromagnetic field detector. We wrote this article in order to help you find the best EMF detector available on the market today!

What is an electromagnetic field detector?

If you’re reading this article, you’re probably using a computer or a Smartphone to do that. This is the way we do things nowadays—we use technology to acquire information, buy things and make things. We basically use technology to live our lives, and the more we acknowledge this, the more reasonable it seems to always be informed about the positive and negative aspects of technological devices.

If you take a second to refresh your memories from physics class, you’ll remember that EMFs are created by charged particles that are moving. Now, if you take the last five words of the last sentence, you’ll have the most basic definition of electric current there is. And the reason why electromagnetic field detectors were invented is for us to be able to detect problems related to everything that works with the help of current, such as electrical wiring and power lines. Since electromagnetic radiation has to do with current, these instruments can also give you readings on the radiation emitted by technological devices and electric appliances.

How do these instruments work?

Even though they were designed to give readings on a thing as important and as common as electromagnetic fields, EMF detectors are actually very simple instruments. When exposed to an electromagnetic field, these detectors will give you a reading with the help of a digital or analog display or a light indicator. Move your EMF detector slowly and you will be able to read more precise measurements. What kind of readings you’ll get will depend on what your instrument measures. EMF detectors can measure electric, magnetic and radio frequencies, but not every instrument will measure them all. You will need to calibrate your instrument in order for it to work properly, and you’ll need to read the user manual that comes with it in order to do that. 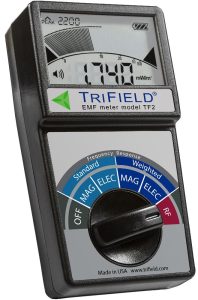 Professionals and people who are really into the details of measuring EMF radiation will find the TriField TF2 EMF meter interesting. This detector allows you to measure radio frequency, electric and magnetic radiation and even measure the EMF inside the human body. The TF2 doesn’t let the fun stop here, however, and it will also read both standard and weighted frequencies, the peak power density, and let you hear the EMF radiation. When you take all of this into account, you’ll actually end up being surprised of how budget-friendly this detector is. And you’ll probably be a bit more surprised to know that when you hear that it measures magnetic radiation with a 3-axis sensor.

The device, furthermore, has an easy-to-read LCD screen, and even though its audio and backlight buttons are a bit hard to reach, it performs great and gives accurate readings.

Lets you hear the EMF radiation

Has a Peak Hold for fast digital signals

Has a 3-axis sensor for the AC magnetic mode

LCD display with a backlight for better data readability

The audio and backlight buttons are a bit hard to reach 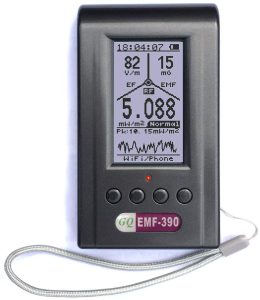 The GQ EMF-390 is one of the most advanced EMF meters on the market, and this is due to its vast feature repertoire. Being as advanced as it is, the device can give you readings on radiation coming from all of the three sources, and it can even measure extremely low-frequency radiation.

This tri-axis detector also has an RF spectrum power analyzer for the detection of the RF power in a particular frequency. Both professionals and enthusiasts will be impressed by the different ways in which the GQ EMF-390 can show the data on its LED screen. Graphs, histograms and an analog-style display—these are all helpful methods in which the meter presents you with the data and it does that in real-time too. Furthermore, the device also lets you save measured data and transfer it to your computer. When we think about all the features the GQ EMF-390 has to offer, the only thing we wish was different is the plastic housing of the detector. However, the plastic it’s made of is sturdy enough and it shouldn’t cause you any problems.

Saves the data with a data logger

Has an RF spectrum power analyzer

Works with a PC software and has a USB port, so linking it to a computer is possible

Has a housing made of plastic

#3 The K2 EMF Meter – Most trusted on the market 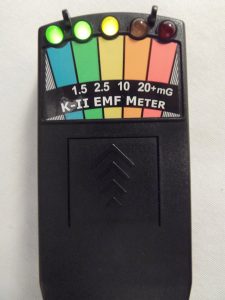 Trusted by many and popular among paranormal investigators, the K2 EMF meter will give you readings on EMF radiation very fast. The device measures radiation in a frequency range from 50 to 20,000 Hz, and it shows the readings on a very intuitive interface. Its interface makes great use of bright LED lights which make it possible for you to know the levels of radiation in the darkness or in the sunlight. Being budget-friendly and battery-powered, the K2 is an EMF detector that you can easily afford and use. In fact, the easiness of use was obviously one of K2’s manufacturers’ priority, which kind of ‘neutralizes’ the fact that this is a single-axis EMF meter.

The most popular EMF detector used in paranormal investigations

Is a single-axis detector 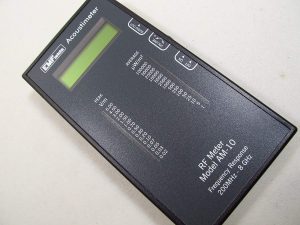 The Acoustimer AM-10 is an EMF detector which proves that detectors that can be used for one particular purpose only can be definitely worth buying. That said, the device measures RF radiation with extreme sensitivity to even the lowest of frequencies and a frequency range that goes up to 8GHz. The AM-10 is actually so accurate that it can even tell you where most of the radiation is coming from. While it’s being used, the detector gives you readings about the peak hold, the current peak signal and the average measurement. It has LED light indicators and an audio alarm that alerts you about radiation. Considering its accuracy, we think that the price of the Acoustimeter AM-10 can be easily justified.

Is very sensitive to even the lowest of frequencies

Detects signals from frequencies of up to 8GHz

Has an audio alarm 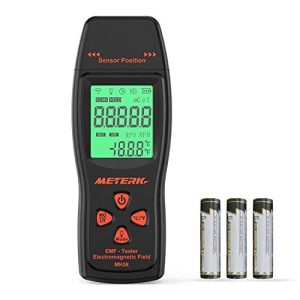 Using an EMF detector for the first time can be a bit confusing, but the Meterk EMF meter can make things a bit simpler. Affordable and easy-to-use, this detector measures electromagnetic radiation with the help of a single-axis sensor. In the presence of dangerous radiation levels, the Metrek alarms you about the danger with a sound alarm and its LED screen turns red. Once you’re done collecting the data, the device allows you to save the measurements and it turns off 10 minutes after being idle. It is the perfect device for beginners, those who like simpler devices and for those who are thinking about pairing the Metrek with some other EMF detector that measures RF radiation.

Has a data hold and max measurement function

Has an auto off function

Has a single-axis sensor 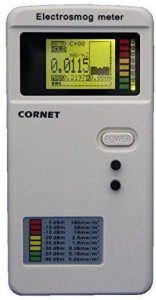 One can always put their trust in a Cornet device, and the Cornet ED78S is definitely not an EMF detector that will let you down. This device measures all three types of radiation and is a very sensitive piece of technology. Of course, the more sensitive the detector, the more ghost hunters it attracts, and the ED78S is not an exception to this rule.

The device is sensitive to both high and low frequencies and it can detect frequencies of up to 8GHz. Once it starts to sense the radiation, it alarms you with the help of a sound alarm. The readings that you get with this EMF detector are very detailed. They’re shown in the form of numbers and histograms on its LED screen. We can argue that this EMF detector is relatively affordable, and the only thing that bugs us when it comes to it is that its manual doesn’t explain some things.

Is sensitive, detect frequencies up to 8GHz

Is popular amongst ghost hunters

Has a sound alarm

Its manual could’ve been written better 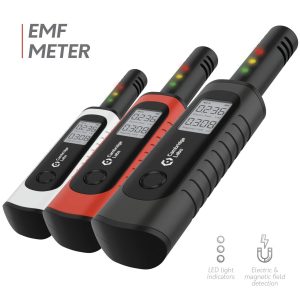 Simpler EMF detectors can be valuable tools for obtaining fast information about the levels of radiation. The simple Cambridge Labs EMF meter can provide you with accurate readings on both MF and EF radiation. The device can also warn you about risky radiation levels with its sound alarm. The detector also features light indicators and it can self-calibrate. Therefore, it practically makes a lot of things easier for you. After you’re done measuring, you can recharge the meter with the help of a USB cable that comes with it. Unfortunately, this is not the detector that will measure radio frequencies and it is not very sensitive to weak frequencies. However, if EM an MF are all you want to have data on, the meter will give you precise readings.

Has a sound alarm for dangerous radiation levels

Is simple to use

Has a very simple and well-though-out LCD screen

Not very sensitive to weak frequencies

The Cell Sensor EMF detector is one of the simplest, if not the simplest detector on our list. This detector is as basic as a good EMF detector can be. It comes with an analog interface that shows the presence of electromagnetic field radiation. Many people who are interested in the paranormal decide to buy it. This is because they believe it can help them hunt ghosts. Whichever your purpose of buying an EMF detector is, however, the Cell Sensor is very sensitive to lower frequencies. The device will also alert you about any dangerous radiation levels with its audio and visual alarms. The device is, furthermore, affordable, but don’t expect extremely accurate results from it. This is a decent EMF detector, but its value will, after all, not top its price.

Used as a tool in paranormal investigations

Iphone 11 Daisy Case?
Do Lithium Batteries Cause Cancer?
How to Turn on Hazards in Tesla?
How Many Joules is a Punch??
Difference Between Do Not Disturb And Airplane Mode?
How to Block Smart Meter Transmission - Here's what you need to know
Why is Emf Greater Than Terminal Voltage??
How to Make Emf Shielding Paint??
Ballistic Iphone 13 Case?
Is It Ok to Sleep Next to Wifi Router??
Do Microwaves Affect Wifi?
How Do I Turn Off My Wifi At Night
Is a Car a Faraday Cage?
Apple Watch Radiation Protection - Is It Safe Or Not?
How to Block Emf From Electrical Panel??
Where to Buy Emf Detector??
Airpods How Far Away From Phone?
What is Terminal Voltage??
Are Magnets Bad for Cell Phones? : Results
What is Si Unit of Emf??