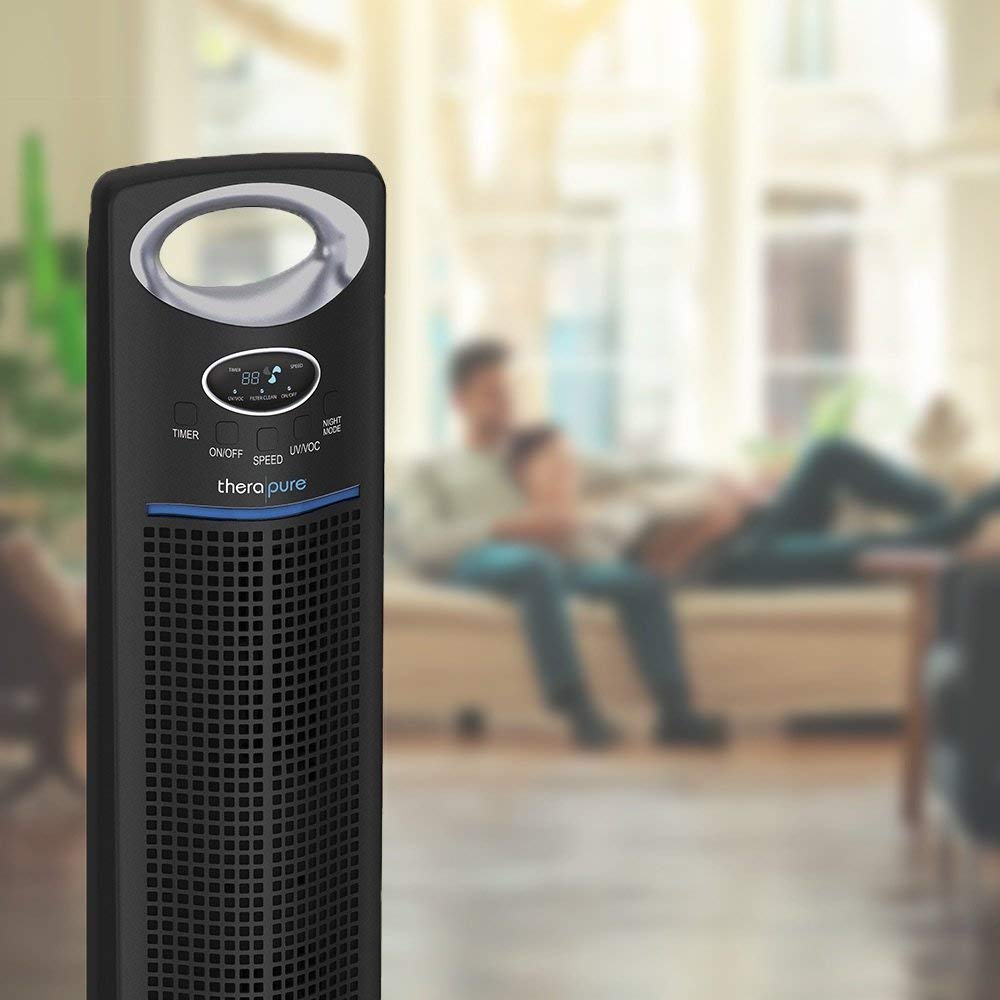 In this Therapure Air Purifiers reviews article, we talk about breathing, and how it affects your quality of life. Breathing clean air is extremely important for our health, but this is sometimes compromised by multiple factors. Taking care of a pet or being a smoker are only two of the reasons for a large number of potentially hazardous airborne particles.

Among some of the particles that can lower the quality of the air we breathe are germs, bacteria, viruses, mold, pet dander, pet hair, toxic fumes, chemical gasses and dust. These particles can increase the risk of health problems in both healthy people and people with already existing health issues. One of the best way to keep these particles away from you while you’re at your home or office is buying an air purifier.

The benefits of air purifiers

Air purifiers are devices that purify the air inside your home or office with the help of different technologies. These technologies include the use of fans, various air filters, UV light and other methods of catching and eliminating harmful airborne particles. By catching and eliminating the particles, air purifiers improve the quality of the air we’re breathing, and good-quality air is an everyday necessity. More than that, purifiers can be effective in preventing asthma attacks, allergic reactions and irritations to the skin, eyes and nose. These devices can also lower the risk of lung diseases, cancer and cardiovascular problems. Purifiers are especially beneficial for children, older people and people who are experiencing any health problems at the moment they’re using the purifier. Ultimately, air purifiers are a step closer to living a less stressful and healthier life.

Why buy a Therapure air purifier?

Therapure air purifiers are among the top air purifier brands that are currently available on the market. This particular brand of purifiers is followed by generally nice commentaries from satisfied customers, many of which have had a nice experience with their Therapures.

The Therapure air purifiers have proved to be efficient in both the prevention and regulation of many of the health problems that we talked about in the previous section. These purifiers make great use of many technologies that are known to produce good results when it comes to air purification. Many Therpure purifiers are designed with HEPA-type filters, UV light, ionizing technology and photocatalyst filter, and, when combined, all of these methods of purification do a great job in removing a large amount of the most common air pollutants and health-threatening particles.

All Therapure air purifiers are efficient in filtering common allergens, germs, irritants and toxins that can be present in the air of our homes and offices. Every air purifier of this brand is suitable for a particular room size, which tells us a lot about this brand’s flexibility and customer care. Each purifier also has a number of fan speeds that it can operate at so that you can customize it for both daytime and nighttime use. These purifiers have great CADR ratings and some of them have 24-hour timers. Furthermore, they are relatively affordable, compact and portable.

Our Therapure air purifires reviews start with the TPP440 air purifier, one of the most trusted Therapure purifiers. The purifier efficiently cleans the air from microorganisms of any kind, common allergens, pat hair and dander, smoke particles and toxic chemical gasses. It is suitable for literally any room that is not bigger than 395 sq. ft, which means that you can purify the air in your entire apartment if you happen to live in one of this size.

The air purifier has a hemispheric HEPA-type filter, a UV light, and a photocatalyst filter, and these three technologies are part of the triple action purification system of the TPP440. Out of the three technologies, it is the HEPA-type filter that’s great for catching dust, smoke and pet dander. The UV light, on the other hand, destroys viruses, bacteria and fungi. Finally, the photocatalyst filter eliminates odors and toxic chemicals such as those released from paint.

The fan of the purifier has three adjustable speeds, which comes in handy once the Sun goes down and it’s time to sleep. Furthermore, the LED display of the TPP440 can be dimmed, so, again, sleeping with this purifier in your room will not be a problem at all.

The filter can be cleaned

More expensive than the other filters on the list

Our Therapure air purifiers reviews continue with the Therapure TPP240– a HEPA-type air purifier that also happens to have a UV germicidal light and a photocatalyst filter integrated in its design. That said, this air purifier is very efficient when it comes to eliminating microorganisms, mold, smoke, toxic fumes that can occur in the household and larger particles like pet dander and hair.

With a CADR rating of 155 for pollen, 132 for dust and 137 for smoke, you can expect that the Therapure TPP240 will do a lot of wonders when it comes to the prevention of allergies and any breathing difficulties. The best thing is, however, that all of this is possible even for home that are as big as 500 sq. ft.

The user-friendliness of this air purifier doesn’t end here, however, since the purifier comes with filters that are easy to clean. This means that you don’t have to replace them, which, furthermore, means that this is not a purifier that will rip off your wallet. Then, another good thing about the TPP240 is that it has a 24-hour timer, so deciding when to use it is completely up to you. Set the timer, and the purifier will filter the air up to three times per hour. Now, some say that it gets a bit noisy once you set it at the highest setting, but since it has a 500 sq. ft. coverage, you can place it wherever you think that it will not disturb you.

Filters the air as much as three times per hour

Filter can be cleaned, and there’s also an indicator that tells you when it’s time to clean the filter

A bit noisy when working on the highest setting

Just another Therapure air purifier with a hemispheric HEPA-type technology, the TPP230 will surprise you with how very little ordinary it is. The HEPA-type filter will indeed remove particles in the air that are 0.1 microns in size, while the UV light will not let any hazardous microorganism that can cause you an infection pass anywhere near your nose. Add to that the photocatalyst filter, and you will have a purifier that will also neutralize odors and airborne chemicals from new carpets and paint.

The three-speed fan of the TPP230 is easily adjustable, and no matter which speed you decide to have your purifier work at, it will still use very little electricity. This, of course, means that you’ll be able to save some money and breathe clean air at the same time. Just in case you need solid proof that that’s what’s going to happen, let us tell you that the TPP230 has a CADR rating of 159 for pollen, 151 for dust and 152 for smoke which is pretty impressive.

Not only does the TPP230 work great, but it is also very efficient for bigger rooms and by that we mean rooms as large as 350 sq. ft. One small downside of the product is that it doesn’t have a carrying handle. However, in all honesty, the purifier is small enough to be picked up and carried without a handle. Therefore, it sure deserves to be a product reviewed in our Therapure air purifiers reviews article.

Doesn’t use a lot of electricity when working

Doesn’t have a handle for carrying

The fourth one of our Therapure air purifiers reviews has to do with the Therapure TPP220-M. This purifier is great for removing germs, bacteria and viruses, but also smoke, odors, toxic fumes, mold and dander. The TPP220-M can efficiently purify air if you place it in a room no larger than 210 sq. ft. this air purifier will get rid off of all those small particles that trigger your allergies, asthma attacks and other breathing difficulties. There are three speeds which you can set the fan of the purifier to work at, and you can count on your TPP220-M to filter the air up to three times in one hour.

Like the filter in some of the previous Therapure models, the filter of the TPP220-M can also be cleaned, which will save you some money on the long run. All in all, this is a very nice air purifier if you have a smaller living room or bedroom since its design is, unfortunately, unsuitable for rooms that are larger. However, the TPP220-M is very beneficial, and you’ll be able to notice that the quality of the air in your room has improved soon after you start using the purifier.

Filter can be cleaned

Not suitable for rooms larger than 201 sq ft

The last review of our Therapure air purifiers article has to do with the Therapure TPP50. Featuring a one-speed fan and a cordless design, the Therapure TPP50 does a great job at filtering smoke and allergens. However, it also filters germs, pet dander and hair, odors, toxic household chemicals and other pollutants. The TPP50 be very practical and able to be directly plugged into an outlet on the wall. This is great if you don’t like having too many cords in every corner of your home, and going cordless is also safe, especially if you have a little child.

The TPP50 can filter the air up to three times per hour. It is very efficient in rooms that are no bigger than 115 sq. ft. If you have a specific room you need to purify the air in, this is the purifier to go for.

The TPP50 has a filter that can be cleaned. This means that you won’t have to be spending money on buying a new filter once this one gets dirty. The purifier is very compact, and that is expected since it was designed to operate in smaller rooms. If you want a simple air purifier for a healthier life, the TPP50 might be the right purifier for you.

Can be used to filter the air three times an hour